Beautiful photo of the owl.
it was SUPER hot yesterday.
Ive seen the owls at Raptors do that..water runs off their beaks in the extreem heat.

By ogopogo -  Jul 16 10:19 pm
-  Jul 16 10:19 pm #49782
4pm Pemberton Park (Richardson & Gonzales, Victoria). walked up to the back of this baseball field where there is a chip trail through the woods. saw nothing on my way in. coming back 10 minutes later, Dad Barred (Pemberton Pete) had already caught a deer mouse and given it to the owlet (Bert). he had no idea how to process it, so was clutching it like a squeaky toy and screeping loudly for assistance. the neighbour's yard had all kinds of birds (lots of distress chirping) and mice, so Dad Barred was still on the hunt up in his Maple tree.
After reading about deer mice spores, I may reconsider climbing through deserted barns looking for Barn Owls!
http://www.bcmj.org/article/hantavirus- ... cal-review 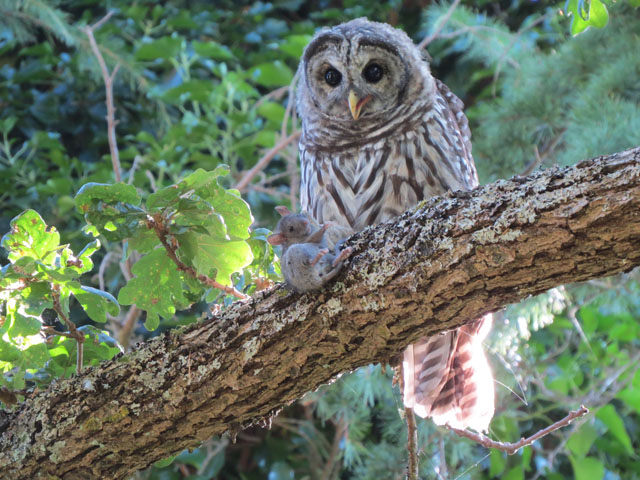 
That's a great photo.. ou always seem to get them at the right time!!

She was there tonight..i left maggie at home and just went myself. spent a good 20-25 minutes with her.. before i left. she didnt move.
She was calm..even when a crow and some other bird kept yapping at her.
tired i think Yes, it's fascinating what owls can sleep through!
Flickr: https://www.flickr.com/photos/126805965@N03/
BC Rare Bird Alert: http://bcbirdalert.blogspot.ca

July 23 Wed-the air was so fresh after finally getting some rain overnight! headed out walking at 8:30am. took a turn through the Woodlands (below Gov't House) to see if the GHOW BigTex was there. She was seen in May in the cedar tree near the end of the path. no luck today.
Headed out to Pemberton Park at Richardson & Gonzales to see if Bert, the Barred owlet and adults were around. Got there at 10:30am. a new sign is up. Talked to the neighbour across Gonzales from the path entrance and she said the two adults were hunting around her back yard garden shacks between 8-10am this morning.
Took a tour around the woods and the block but didn't see them.
Walked to SEW in Beacon Hill and at 12:30pm saw all 3 Barred Owlets, no adults seen for 3 days. 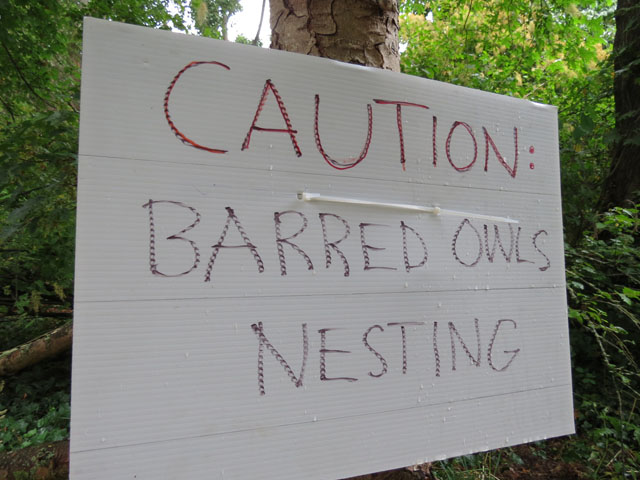 By skiesthelimit22 -  Aug 11 9:47 pm
-  Aug 11 9:47 pm #50659
Took a trip over to Kings Pond. Heard the crows going nuts and wasn't surprised to find this majestic creature. It was definitely a special moment for us. Thanks for sharing your stories and photos. It is much appreciated. 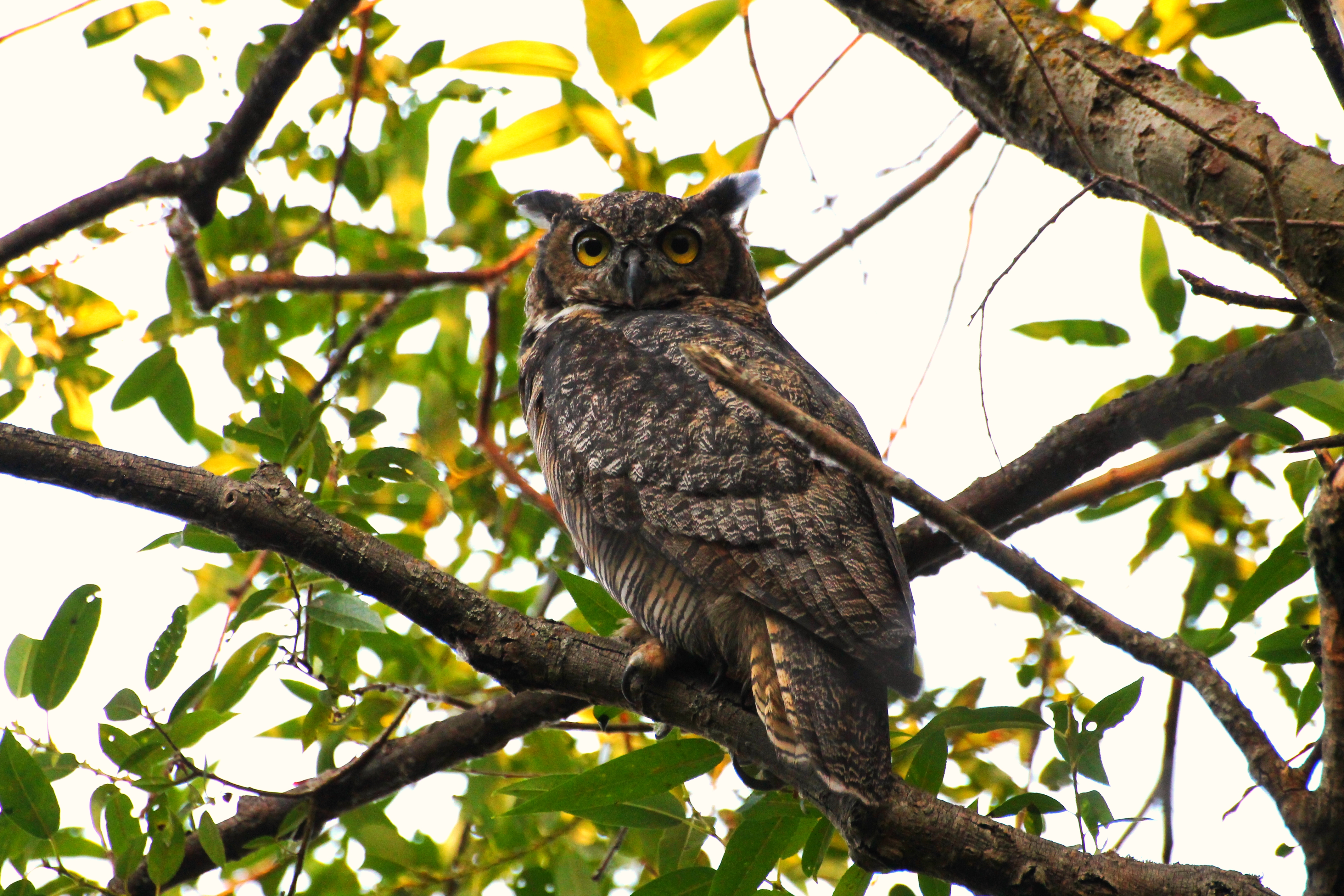 By ogopogo -  Oct 11 7:59 pm
-  Oct 11 7:59 pm #53176
Oct 11, 2014: Northern Saw-whet Owls are on the move. One was at UVIC 2 weeks ago, one was seen in Nov 2011 in a holly tree on the path of Cedar Hill Golf Course, a hatch-year was banded at Pedder Bay (near Sooke) Sept 16, 2014 and re-located at Intermountain Bird Observatory near Boise, Idaho Oct 4, 783 km SE.
Babbington Hill, East Sooke Park, Aylard Farm has sightings of a Northern Pygmy Owl.
GHOW are mating up. There are many in Greater Victoria.
Barred Owls are in every park.
Short-eared was seen this time last year passing through Beacon Hill.
Snowy Owls were seen in Oct/Nov last year downtown and near Govt House on Pemberton.

Enjoy a fall walk or hike and keep your eyes open!

By ogopogo -  Oct 23 8:27 am
-  Oct 23 8:27 am #53579
Oct 23, 2014
-noticed on E-bird Canada, the first Snowy was spotted 40 miles NW of Regina at Last Mountain Lake Wildlife Refuge on Oct 20th. I'm keeping an eye out at Beacon Hill Park and Government House and those birders in Saanich are probably watching the Airport.
-Swan Lake, Tuesday Pond. a Saw-whet flew into a bush by a birder who had large lens on tripod and couldn't swivel in time for the shot. it moved on. may have been the one also seen at UVIC as this was near the end of Sept, beginning of Oct.
-Pemberton Bert, this year's Barred at Pemberton Park, is learning to hunt but is swooping tan-coloured baseball caps says a local man. Sometimes they get a little mixed up about what is edible.
-Oct 14 noon I was out at Pacific Forestry Centre (near Colquitz River Park) and Oulette, the female GHOW was sitting in a Douglas Fir below the rhodo garden out back. Several Douglas Fir have orange ribbons around them, including the one she was sitting on. I'm told those trees are designated for "demolition"; it's a research centre, so they get to wack trees down if they want. It will be interesting to see where this pair choose to nest this year.
Bumped into a fellow who said he was having dinner with friends in Metchosin and a GHOW was sitting on their tree right outside the L/R window. Nice dinner entertainment.
-lots of Barred around. I see them daily. 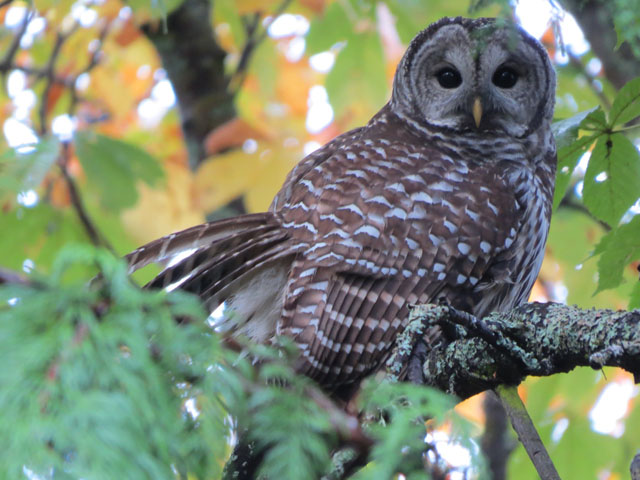 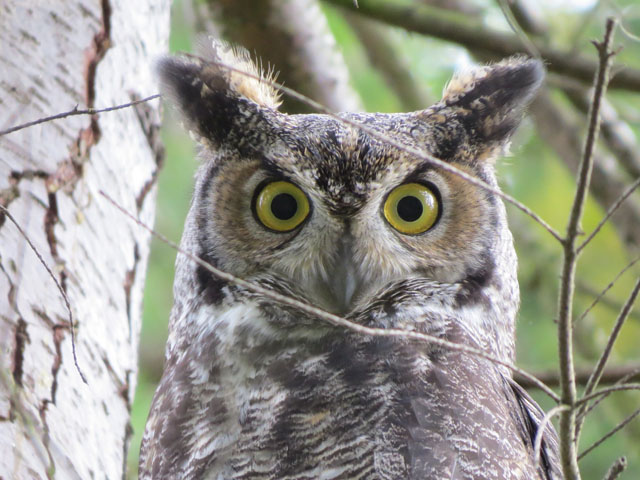 Looks like a juvenile Cooper's Hawk to me. Here […]

You can share the recording via Dropbox, Google Dr[…]

Amazing getting a pair together John! Great stuff!